Expectations plummet after “Energy” Summit… Time to wake up, Europe!

In the wake of the first EU summit dedicated to Energy on February 4th 2011, I think it is crucial to be reminded why the EU’s energy future, and the choices made today, matter, and why, when it comes to climate change, we must act now.

“Dedicated”, it turned out, was rather a strong word for a Council meeting that became as much preoccupied with innovation, stability in the euro zone, and events in Egypt, as with Europe’s energy future. The outcome of the summit was certainly not a binding target on energy efficiency. Anyone listening to the lip service EU officials have been paying to the greatest of all energy sources – the energy we don’t use – and the economic and environmental benefits touted in its favour, might have hoped for one… 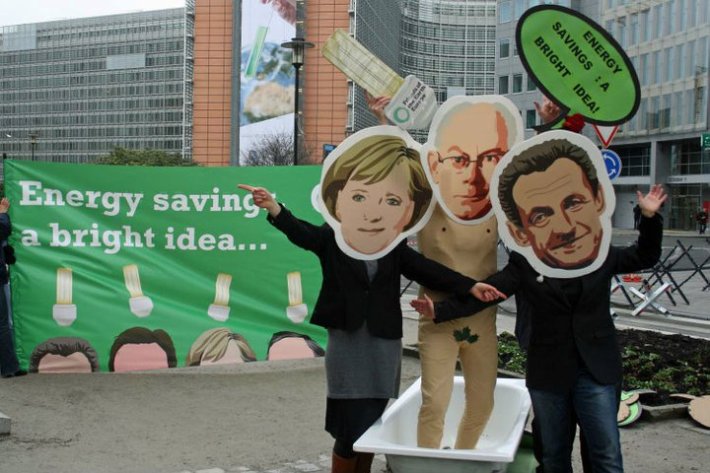 But no, the Council Conclusions have the strange outcome of moving forward in words, but backwards in deeds. They state that the “2020 20% energy efficiency target as agreed by the June 2010 European Council, which is presently not on track, must be delivered”, but then go on to agree to review energy-efficiency policy only in 2013, instead of 2012 as previously planned, and plan to consider further measures only “if necessary“.

The conclusions emphasize that the Commission’s upcoming proposal for a new Energy Efficiency Plan should concentrate on “policies and measures across the full energy supply chain” without even mentioning the role for energy demand.

What’s more, before even the first mention of energy efficiency, there is an explicit reference to exploring European deposits of shale gas and oil shale. Risky and expensive, these “unconventional” energy sources require energy-intensive and aquifer (ground water) depleting means of extraction, to get ever less energy in return for the energy you put in, combined with often dire environmental effects. The fact that the EU is even considering such exploits demonstrates the desperate scramble for new, ever-riskier and more damaging fossil-fuels – hardly surprising when everything in our socio-economic set-up depends on them: industry, transport, housing, pharmaceuticals, agriculture – instead of kicking the habit.

The provision of energy to EU citizens, and likewise to every citizen of the world, in countries that are rich, poor, democratic, autocratic, and every mixture in between, must be considered within the constraints of climate change, as well as existing inequalities, injustices and resource-fueled conflicts.

As International Climate Negotiations take us not-far-enough-and-far-too-slowly, the policy decisions regarding energy infrastructure priorities, energy demand and supply, continue to be made. Decisions made this spring will in part determine the direction energy policy takes at a European level, through to 2020. Yet the mood of urgency, determination to exceed expectations regarding CO2 emissions, renewable energy provision and energy efficiency is entirely lacking.

At this point, I think it is vital to remind people, those who live in the EU, and especially those who have power to influence energy policy, of the urgency of the challenge, and the paramount importance of the decisions made now.

Energy, its provision and consumption, is at the heart of climate change, its causes and its solutions. So please, let us wake up, and not make choices today that lock us into new outdated fossil-fuel infrastructure, or rely on the technology we don’t yet have to ‘fix’ a flabbergastingly complex climatic system, abounding with reinforcing feedback loops and tipping points.

This kind of human arrogance in the face of a threat to the very preconditions for human, and other species, existence flouts the basic precautionary principle: the more severe the consequences are, the less rational it is to take risks or gamble on the outcome. Why wait with ideological conviction for technological fixes when the solutions are already here: using less energy and resources, changing behaviour and consumption patterns.

The way energy is sourced needs to change, as Jeremy Rifkin said at the Alternative Energy Summit, from being “based on the carbon deposits of the Jurassic period” to harness the energy distributed in every square inch of the globe, as light and heat from the sun, from the earth, from the wind, the waves and the tides.

At every level there is a need to be more efficient with energy: in the way it is produced, transported and used. Consider, for example, traditional power stations that generate electricity by using steam to turn turbines – be they coal, gas or nuclear – one half to two-thirds of the energy content of the input fuel is wasted in the form of heat, usually dumped into the atmosphere via cooling towers. Up to three kilowatt-hours of every four can be lost because of inadequate electricity transmission and storage facilities (Cullen et al. 2001). Many of Europe’s inefficient homes heat the street outside more than their own living rooms.

Where the economy is incompatible with these needs, to use less, to behave, consume, and source energy differently, and far more efficiently, the economy must be changed.

This short film “Wake up, freak out and get a grip”, by Leo Murray, may not surprise you if you’ve kept up to date with developments in climate science, but it tells a striking narrative of the dangers of climatic tipping points and the urgency of why we must act now, at every level, individual, community, national, regional and international. It is a reminder that climate change holds huge potential for conflict, over increasingly scarce resources, for climate refugees in their billions and for reactionary policies reminiscent of life-boat ethics. I found it an inspiring and chilling piece, and whether the animation is your cup of tea or not, if you watch it till the end it will remind you that ‘This is not the time to panic, or to despair. This is the time to act. … There is no great mystery about what we need to do to reduce emissions in line with the science; we simply need to consume less.’