You may well think that the EU – being a peace project and having no armed forces of its own – would not be a key target for the arms industry lobby. You’d be wrong. 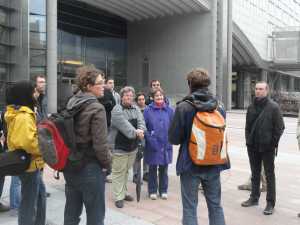 QCEA Representatives Liz Scurfield and Martina Weitsch spent part of their Saturday afternoon on 25 June 2011 at a walking tour organised by Corporate Europe Observatory entitled ‘War Starts Here’. This was intended to show the links between decision-makers and arms industry lobbies.

Brussels boasts as many (or possibly more) lobbyists that Washington, D.C. – 70% of them represent industry; 20% represent local and regional authorities and similar organisations; 10% are NGOs representing civil society including faith groups, trade unions and campaigning organisations.

All three of them literally touch this famous point in Brussels. Also right there, you will find the Brussels office of MBDA Missile Systems; this is a company owned by EADS (37.5%), BAE Systems (37.5%), and Finmeccanica (25%). This is a company which – as the name implies – makes missiles. It has subsidiaries in Germany, France, Italy, the UK and the US; it employs over 10 000 people. The fact that it chooses to locate its Brussels office so cheek-by-jowl with these three EU institutions gives an idea of how important the contact with them is. Offices around there aren’t cheap.

Just up the road is the Brussels office of Thales who, with the owners of MBDA, make up the top 4 European arms industry players.

They all supply details on the European Commission Transparency Register. That means they acknowledge their status as lobby arms of their companies. EADS, BAE Systems and Finmeccanica have their own offices in Brussels, too, though they are a little further afield, but all three of them are still in easy walking distance of the institutions. The lobby budget declared by them is as follows:

This does not, of course, include the lobbying budget for MBDA. They declare for 2010 that they spent less than € 50 000 on lobbying. Incredible. For comparison, the figure declared by QCEA is under € 200 000 on the basis that as our primary purpose is to advocate for the concerns of Quakers, the primary focus of our budget is that area of activity, i.e. we declare about 80% of our total budget. There’s transparency and then there is transparency!

So why is the European Union so important to the European Arms industry? Ever since the 1990s, the EU has been developing a crisis management capacity under the heading of Common Security and Defence Policy; this is an attempt to provide the EU with its own independent (of NATO) capacity to act internationally. The trigger for this development were the conflicts in the Western Balkans where both the US and EU Member States felt that the EU should intervene rather than the US. But at the time, the EU had no way of doing this.

It is a fact that of the of the missions so far undertaken, 6 of the 11 completed missions and 10 of the 13 ongoing missions are civilian in nature. Nonetheless, there has been an ongoing focus on developing military capabilities which far exceeds the focus on civilian capabilities.

Added to this, the EU’s response to terrorism has been at least in part very technologically focused and here the interest of the arms industry has really been shown.

We have published elsewhere on the subject of the European Security Research Programme so I will only list the highlights of this development:

But again, this is not where it stops. Also in 2003, the European Union created the European Defence Agency. We didn’t visit their offices but they, too, are not far away from the hub of the arms industry lobby. The Agency was proposed in the erstwhile Constitutional Treaty but was actually created before this treaty was either signed or ratified (it was never ratified because of ‘no’ votes in referenda in France and the Netherlands in 2005). The agency is also enshrined in the Lisbon Treaty so now has a legal basis in the treaties. This agency also funds research. I haven’t done a detailed study or the research it has funded to date but the first project information sheet I randomly picked shows that MBDA are the lead actor.

The European Parliament also has so-called Intergroups – informal, multi-party groups which discuss issues of common interest. There are 20 or so in each Parlimantary period and for the 2009-2014 period there is an intergroup on ‘Sky and Space’ with no fewer than 81 members. This is an opporunity for the industry to gain the ear of MEPs. It is then not surprising to find that the intergroup has chosen as its secretariat the Aerospace and Defence Industries Association of Europe whose Council includes BAE Systems, EADS, Finmeccanica, Thales and MBDA among others. But intergroups come and go with each new parliament.

More influential even, and less transient, is the Kangaroo Group; this was formed in 1979 and lists among its goals a European common security and defence policy. This is not an intergroup, nor is it in any way connected directly or organisationally to the European Parliament. But its offical address is the European Parliament Building in Brussels. And among its corporate members we find EADS, Thales and MBDA.

Finally, there are the think tanks. Groups which do not describe themselves as lobby organisations but as neutral discussion forums. One of them is the Security & Defence Agenda (SDA). It organises discussions and publishes reports on a variety of subjects. The most recent reports included:

And among the corporate members to whom thanks are expressed in these reports we find: EADS, Thales, BAE Systems, Finmeccanica and MBDA.

Should any of this worry us? We’ll leave that decision to you. But at least we thought that you should know.

Martina worked for Quaker Council for European Affairs as one of two Joint Representatives from 2002 to October 2012. Her main areas of work were the EU role in Palestine/Israel, EU peacebuilding, conflict prevention and crisis management, EU finances, democratic accountability and relations with the European Investment Bank.
View all posts by Martina Weitsch →