Neo-liberal growth-based economics: Bad for the climate, great for inequality?

In QCEA’s recent discussion paper, “Sustainable Growth or Growth vs. Sustainability – Examining the relationships between resource use, climate emissions and economic growth”, the purpose of economic growth is questioned. One of the core assumptions of the neo-liberal free market economic paradigm is that economies must grow and that growth is good.

The climate is changing as economic inequalities continue to grow. Image CC BY Ben Seidelman, via Flickr

Often, it is implied that global economic growth is necessary for development, and more specifically, the eradication of poverty. However, there is a strong and compelling argument that not only is aggregate economic growth an absurd means to end poverty, because of the structural tendencies towards inequality, but the same structural tendencies gear us towards environmental degradation, which in turn, exacerbates poverty and inequality (see here for the effects of climate change on poverty).

The briefing notes that:

“Defenders of global economic growth often argue that it is necessary to achieve poverty eradication. Yet growth is an extraordinarily inefficient means to do this; the rich must become vastly richer in order to ensure incremental gains for the poorest. In the 1990s, for $1 to reach those in extreme poverty, ‘it took $166 of extra global production and consumption, generating enormous environmental impacts which counter-productively hurt the poorest most’. Because growth is linked with increased ecological space consumption, the detrimental impacts of climate change on the poor will quickly outweigh the benefits from growth. For global economic growth to raise the income of the poorest to $3 a day, 15 planets would be required; the earth would be ‘uninhabitable long before poverty is eradicated’.”

Contrast of the unequal. Rich and poor in Bangkok. Image CC BY-NC-SA 2.0 bosse76, via Flickr

The problem of global poverty is integrally related to inequality. To illustrate, we live in a world where:

Inequality is a prerequisite of free-market economics. Inequality of opportunity stems from the structural limitations that arise out of a global division of labour. As production gravitates towards the areas it is comparatively most efficiently done, different groups in different regions are consigned to different kinds of work. Broadly speaking, people in MDCs are better able to pursue careers in the service and quaternary (or knowledge-based, e.g. ICT, R&D) industries, with less developed country (LDC) citizens more limited to agricultural, extractive and manufacturing sectors. Free trade replicates and intensifies this structure because of the systematic tendency to ensure success to the successful. As explained by Donnella H. Meadows, one of the authors of the pioneering 1972 ‘Limits to Growth’, in a posthumously published book ‘Thinking in Systems’, the use of ‘accumulated wealth, privilege, special access, or inside information [is used] to create more wealth, privilege, access or information.’ Monopolies arise because ‘market competition systematically eliminates market competition’ (Meadows 2009:127). 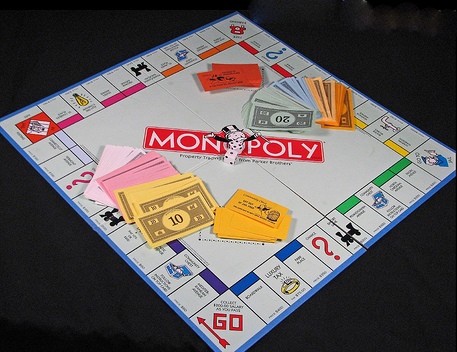 Elizabeth J. Magie, a Quaker from Virginia, created the predessecor of Monopoly in the late 19th Century, with the aim of illustrating how the buying and renting of land benefited some, to the detriment of others. See http://bit.ly/qC0tM6. Image CC BY-NC 2.0 DaylandS, via Flickr

Similarly, poverty is self-perpetuating for numerous reasons. Children in poor communities have less educational opportunities, leaving them without marketable skills, unable to get higher paid jobs. Fewer assets and lower incomes limit borrowing ability or trap people in debt. Uneven land ownership means tenant farmers cannot save enough to buy land, whilst their rent payments enable landowners to buy more. Since the poor are ‘often unorganized and inarticulate, a disproportionately small part of government expenditure is allocated to their needs’ (Meadows 2009:129).

Feedback mechanisms such as these contribute to the polarization of wealth in our current global economic order, and without limits on the gains that individuals, corporations and states can make, or redistributive mechanisms to level the playing field, it is hard to see how structural tendencies like success to the successful can be compensated for. Yet, the free trade paradigm is explicitly against this kind of interference.

Aysmmetrical terms of trade also contribute to inequality, for if ‘a country concentrates on food and raw materials, whose price relative to manufactured goods is falling over time, it will inevitably fall behind… industrial states in national income’ (Lairson & Skidmore 1997: 17). Much has been written about this phenomenon, but what is less well understood is the existence of ecologically unequal terms of trade. ‘Goods are exported at prices that do not take into account the social and environmental costs of their extraction or production’ (Raina 2005: 19). Trade balanced in monetary terms may be unequal in terms of natural resource flows, and ‘some world regions may systematically benefit from the ecological capacity of other world regions by importing resource-intensive products and exporting wastes’ (Paredis et al. 2004: 78). Tools like Material Flow Analysis have been very useful in understanding the scope of this phenomenon. For a case study, see here.

Alfred Hornborg argues that trade represents asymmetric flows of ‘productive potential (gauged in terms such as energy, labor time and hectare yields)’ (Hornborg 2003: 4). Raw materials represent “available” or useable energy, whereas finished products, despite their higher market value, represent a decrease in “available” energy. Consequently, ‘industrial centers exporting high-utility commodities will automatically gain access to ever greater amounts of available energy from their hinterlands. The more energy they have dissipated today, the more “new” energy they will be able to buy—and dissipate—tomorrow’ (Hornborg 2003: 6). Thus, a net import of energy ‘is the basis of a self-reinforcing accumulation of technological superiority and power vis-á-vis other regions’ (Hornborg 2003: 8).

The externalisation of the real costs of the products consumed, and lifestyles pursued, in the rich world has, for too long, hidden from us the fact that we cannot afford to pay the price. Biodiversity, ecosystem services, the greenhouse gas absorption capacity of oceans, vegetation and soils and the carrying capacity of the atmosphere (the carbon cycle!), the nitrogen cycle, fertile soils, replenishable fish stocks, fresh groundwater supplies, etc., all play a colossal and irreplaceable part in our economy and if costed, would dwarf all other factors (i.e. costs of extraction, transport, processing, manufacturing, consuming, disposing of products). We can only destroy so many habitats, disrupt the balance of so many ecosystems, witness so many extinctions, release so much carbon from billions of years of decomposed fossilised life, deforest so much land, deplete so much groundwater, over-fish so much, before we have irreparably undermined our continued ability to survive and flourish. Yet these limits to our activity, placed on us by the single planet we occupy and all of its beautifully complex and still only marginally understood systems, have been totally ignored by the rampant consumption and growth fueled by a system that places no value, and no cost, on these things.

These structural tendencies towards inequality discussed above have ‘meant that production has been disproportionately geared towards meeting the changing lifestyle requirements of the rich everywhere, rather than ensuring basic needs for all’ (Simms et al. 2009: 18), and the failure to recognise that our economy is a subsystem of our global ecosystem, make the prevailing economic paradigm ill-equipped to resolve either global inequality or climate change. The status-quo, simply put, appears to be antithetical to creating a fair and sustainable future.

Hornborg, Alf (2003):  ‘The Unequal Exchange of Time and Space: Toward a Non-Normative Ecological Theory of Exploitation’ in Journal of Ecological Anthropology, Volume 7, No. 1, pp.4-10