The Responsibility to Protect Ten years on

Jennifer Welsh, the UN Secretary General’s Advisor on the Responsibility to Protect, spoke in Brussels recently at a meeting of the Civil Society Dialogue Network (CSDN). CSDN brings representatives of NGOs and academics together with staff of the European External Action Service, the European Commission, and other EU institutions to discuss the role of the EU in peacebuilding. There was time during the meeting for input from NGO representatives as well as from Jennifer Welsh and one or two speakers from EU institutions.

During the course of the meeting I learnt that:
• the number of conflicts in which civilians have been in need of protection has increased significantly during the past three or four years;
• recent high­level meetings in Cambodia and Addis Ababa have taken stock of the Responsibility to Protect (R2P) and its implementation;
• serious questions are being asked about the implementation of R2P in Libya and Syria in particular;
• it is thought that the use of military force by the international community without the consent of the state concerned is likely to become a rare occurrence in future;
• it is considered to be important for the EU to work together with the Council of Europe and the Organisation for Security and Cooperation in Europe (OSCE). 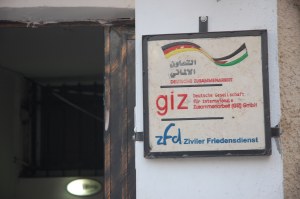 There is an international consensus that prevention is of primary importance. This is to be welcomed. The OSCE in particular plays a constructive role in preventing violent conflict within Europe. And the Council of Europe has an important role in education and the defence of human rights throughout Europe. Both organisations encompass countries which are outside the EU. Much more needs to be done to rebuild societies in the aftermath of violent conflict. Quakers in Rwanda and Burundi are doing vital work in trauma healing and reconciliation. This kind of work with shattered communities needs to be much more widespread and deserves international support. Without reconciliation, grievances will fester and the seeds of the next wave of violence will be sown.

There are significant differences of opinion about how the international community should react to the perpetration of mass atrocities. Many states, with the USA, France and the UK at the forefront, are quick to see the answer in military intervention. Other states, such as Germany and Scandinavian countries, are less bellicose. Germany, for example, funds a civilian peace service (Ziviler Friedensdienst).

Much more needs to be done to develop and try out non­military forms of intervention. Effective policing would make a huge difference in many situations. And support needs to be given to civil society initiatives, such as the negotiation of local ceasefires in the midst of war­torn Syria. Above all, the international community needs to avoid adding fuel to the fires of violent conflict either by engaging in military intervention or by providing weapons to the protagonists. Arms embargoes could be an effective preventative measure, if implemented well in advance of a potential conflict.

The Responsibility to Protect needs to be taken seriously not only by governments, but also by people and civil society organisations the world over. The United Nations Office on Genocide Prevention and the Responsibility to Protect is evidently doing a lot of useful work. They have recently published, for example, a “Framework of Analysis for Atrocity Crimes: A tool for prevention”, which identifies a number of risk factors which could lead to mass atrocities being committed.

QCEA advocates a major shift in the allocation of resources towards peacebuilding and conflict prevention and away from preparing for and carrying out military intervention, which is so much more costly and is invariably counter­productive.

Gordon Matthews is a member of the QCEA staff team with a special interest in peace issues.
View all posts by Gordon Matthews →
Loading Comments...
%d bloggers like this: