An EU court has been considering whether European free trade rules will prevent Scottish plans to reduce alcohol-related harm.

It is now more than three years since action to reduce the consumption of the cheapest super-strength alcoholic drinks was agreed through the democratic process in Scotland. The Alcohol (Minimum Pricing) Act 2012 allows for the introduction of a minimum price of 50p (0.68 euro) per unit of alcohol in drinks.

However, this policy has not yet been implemented because Europe’s alcohol barons are seeking to prevent the policy in court. Alcohol lobbyists claim the legislation breaches the UK’s EU treaty obligations because it would restrain trade. This led Scotland’s Court of Session in Edinburgh to refer minimum unit pricing to the Luxembourg-based Court of Justice of the European Union.

During my policing career, I witnessed the damage alcohol does in society. My former police service estimated that half of violent crime was alcohol-related (more than 1 million crimes per year in the UK alone). Alcohol dependency or misuse is also an aggravating factor in about 40% of demand on police services, including a high proportion of domestic abuse, anti-social behaviour and road traffic collisions. 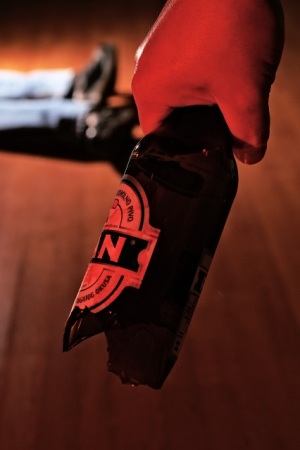 Alcohol is a an aggravating factor in the majority of violent crime. Photo: Darko Mareš, Creative Commons

Far beyond policing, addressing the impact of alcohol misuse costs Britain twice as much as illegal drugs. It is easy to see why when we consider:

It is therefore not surprising that the Scottish Crime and Justice Survey found that 96% of people are concerned about alcohol abuse.

Alcohol misuse varies widely in Europe, but overall the continent consumes more alcohol than any other. The Scottish Government have shown the most interest in MUP, but Estonia, Ireland, Wales and Poland have all begun to consider the policy.

New alcohol guidelines produced by the UK’s Chief Medical Officers recommend a maximum consumption of 14 units of alcohol for both men and women (Unit = 10ml of pure alcohol). A can of super-strong lager contains 4.5 units and is widely sold in Britain for £1.39 (1.89 euro). A large bottle of white cider containing 22.5 units is sold for about £4 (5.44 euro). Cheaper than the same quantity of bottled water!

This type of product is commonly used by the most vulnerable drinkers, including the homeless and the very young. Recognising the link between the price of super-strength alcoholic drinks and social harm, health professionals recommend minimum unit pricing (MUP) as the most effective policy.

2 and 3 litre bottles of super-strength cider can contain up to 8 times the recommended daily alcohol limit, and be sold for less than bottled water. Photo credit: Doorway Community Project

The future of corporate power

SpiritsEurope, the Scotch Whisky Association and other representatives of the alcohol trade argue that MUP contravenes Article 34 of Treaty on the Functioning of the European Union (TFEU) as super-cheap alcohol imported from other EU Member States would lose its price advantage.

The recent ruling by the Court of Justice of the EU agreed that MUP did place limitations on a completely free market, but that they could be justified if MUP would be more effective than other policies. The issue will be considered again by the Scottish Court of Session, with a final decision by the UK Supreme Court.

MUP is an example of a policy agreed through the democratic process being held up by big business, with corporate profit prioritised over the health and well-being of European citizens.

The situation could still get worse:

European social, health and environmental protections will face increasing legal challenge if the Transatlantic Trade and Investment Partnership (TTIP), and the Investor State Dispute settlement mechanism (ISDS) are agreed between the US and the EU. This would allow big business to bypass public institutions like the Court of Justice of the EU or UK Supreme Court entirely, making it far less likely that legislation which restricts free trade would be accepted. To find out more about these concerns – see the recent QCEA briefing on TTIP and health.

You can also read more about Quakers and alcohol on the Quaker Action on Alcohol and Drug (QAAD) website, or by watching this video for a historical perspective.