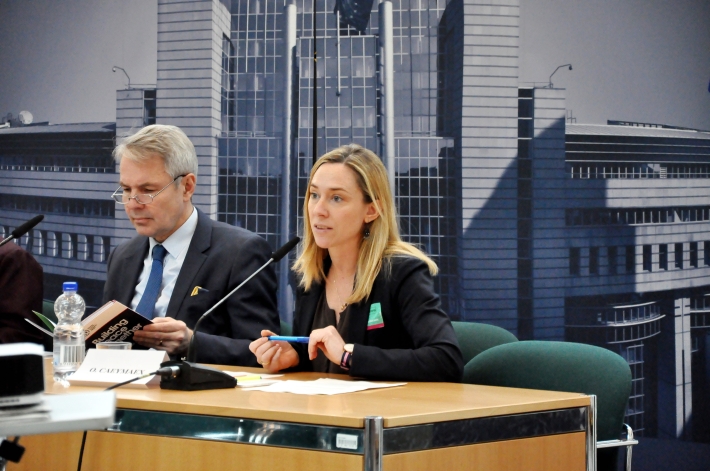 Olivia Caeymaex launching Building Peace Together in the European Parliament

We’ve had lots of feedback since publishing Building Peace Together on February 20. Many have said that it is a timely input into debates on how peacebuilding can be used to address violent conflict, rather than traditional interventions.

Two years since the adoption of the Sustainable Development Goals (SDGs) within the UN 2030 Agenda, much work lies ahead in achieving SDG 16 which promotes just, peaceful and inclusive societies. The nature of conflict and its root causes are changing – requiring rethinking of many current responses to violent conflict. Building Peace Together shows how 40 peacebuilding tools across 11 sectors of government can nurture inclusive, sustainable peace.

Building Peace Together was released in the context of several international, regional, national debates about the need for integrated strategies to prevent conflict. This includes the UN-World Bank Pathways to Peace as well as the German Policy Guidelines on Preventing Crises, Resolving Conflicts and Building Peace. Building Peace Together complements these publications by showing how a variety of organisations, including civil society and government ministries, can be engaged in building peace. We give 80 practical examples from across the globe.

During a series of launch events, speakers commented on the relevance of our new resource to ongoing policy developments:

On March 15 at Quaker House, Jan Rosing from the EU department responsible for peacebuilding and conflict prevention (EEAS PRISM) remarked on the report’s relevance to EU discussions about implementing the EU Council Conclusions on the Integrated Approach to External Conflicts and Crises. The Conclusions follow the 2016 EU Global Strategy, which seeks a more coherent way for the EU to engage in foreign and security policy. Significantly, the Conclusions highlight concepts such as human security, conflict prevention, and local ownership. Building Peace Together and input from civil society, in general, were recognised as providing guidance on how such concepts can be implemented.

On March 19, QCEA and Molly Scott Cato MEP co-organised a launch event at the European Parliament Library. Ben Moore from the European Peacebuilding Liaison Office (EPLO) explained how the report is a timely contribution considering ongoing EU policy discussions. The issue of future EU budgets (the post 2020 Multiannual Financial Framework) was also raised. Funds for peace such as the Instrument Contributing to Stability and Peace (IcSP) are likely to be merged in a single fund for external action. Building Peace Together was described as useful in making an argument dedicated peacebuilding funding.

On 21 March, QCEA and Quaker Peace and Social Witness (QPSW) co-organised a third launch event at Friends House in London. Julian Egan from International Alert discussed his organisation’s recent publication Redressing the Balance that makes the case for why peacebuilding is needed to address crises. Building Peace Together was seen to help build evidence that peacebuilding works by showing concrete examples of how it can be done.

Overall, the feedback on Building Peace Together indicates that it is an important part of the search for better strategies and tools for building positive peace. Several speakers at the launch events commented on the need to increase the understanding of the value and effectiveness of peacebuilding to a wider audience. Indeed, the practical, comparative and example-led nature of the report shows how everyone can be engaged in the endeavour to prevent violent conflict and build durable peace. In the coming months we will be working hard to keep the peacebuilding tools in Building Peace Together in front of European policy makers. 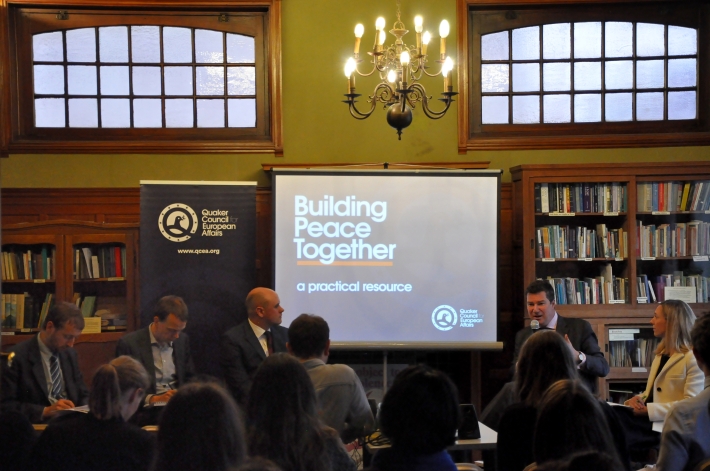