Unsustainable political crisis in the Mediterranean 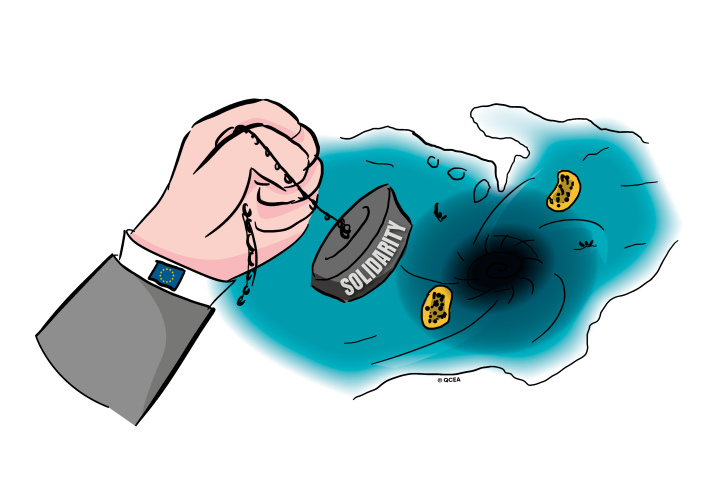 On the 10th April 2019 eight people are reported to have drowned in the Mediterranean Sea as their calls for help were ignored and no search and rescue operation intervened. The rest of the 20 people on board the small wooden boat, including young children, now have their fates resting in Libya. The Libyan government had intercepted the boat late in the evening after Italian, Maltese and Tunisian authorities all declined to get involved. The UN Refugee Agency had reiterated only the day before the incident that “conditions in Libya are not safe for rescued or intercepted refugees and migrants, and these people must not be returned there.”

At the same time some 200 miles north, a boat carrying 64 people has been stranded at sea for over a week because no European Government is willing to let the boat dock at their ports. The NGO sea vessel named Alan Kurdi (after the three year old Syrian boy who drowned in 2015) rescued the 64 people from a dinghy boat which was similarly stranded by the Libyan coast. Although ‘fortunate’ enough to have been rescued, the passengers (including pregnant women and children) must now wait in unsafe conditions at sea whilst European governments quarrel to agree on who will take responsibility for them.

On exactly the same day as the above two incidents, three teenage boys were being trialled in a Maltese court on terrorist charges, after they (along with over 100 others) had also been rescued from a dinghy boat near the Libyan coast the previous week. They are alleged to have hijacked the boat after being rescued by a commercial vessel and pressurisng the crew in bringing them to Europe. The boat crew, who had a legal and moral obligation to rescue the stranded people and bring them to a port of safety, are contradictably being charged with smuggling. As for the rest of the 100+ individuals rescued, they may have escaped criminal charges, but they will now have to endure months of inhumane detention conditions until their fate is decided upon.

These three events, all of which occurred on the same day, perfectly reflect the current political crisis in the Mediterranean Sea. Those lucky enough not to drown, get refouled to Libya, or await stranded at sea as the political pawn of European governments, are punished with vastly unreasonable criminal charges and the most unsympathetic welcoming.

The tragic incidents described above should not be viewed in isolation. They are challenges the Mediterranean face on a daily basis. I have no doubt that at this very moment dozens of very similar events will be occurring, with just as bleak an outcome. And no doubt will this continue over the summer, and in fact over the next one, two and three years – or for as long as it takes for us to foster an alternative political climate where human life comes before national interest.

The failure of the European Union to successfully reform the Dublin IV Regulation has undoubtedly played a signifiant role in the tragedies which have unfolded (and shall continue to unfold) in the Mediterranean Sea. Years of ramped up anti-migrant discourse and nationalist politics have poisoned our ability to make real change to Europe’s Migration Policy.

The current system, which places an enormous burden on the southern EU member states, has unsurprisingly lead to a greater surge in anti-migrant discourse in those countries. Last year, in an effort to highlight Europe’s lack of burden sharing, the Italian government decided it would no longer allow NGO rescue boats to disembark at its ports. This isn’t the only incident of deterring NGO rescue missions. NGO boats are regularly refused entrance to disembark, as with the Alan Kurdi vessel (again, because of the lack of fair distribution mechanisms within the EU). Once they do disembark, they are frequently challenged with an array of criminal charges. Commercial vessels, as we have seen, are also being deterred as they risk being prosecuted under smuggling charges.

On the 31st March 2019 the European Union decided to put an end its own sea rescue missions in the Mediterranean which has claimed to save over 40,000 people at sea. Alongside national governments refusing calls for help whilst going out of their way to shelve NGO missions, it is hard to imagine a more inhumane response by European governments to the desperation of those often fleeing poverty, violence and persecution.

The criminalisation of NGO’s and those defending human rights presents a particularity troubling predicament. A clear comparison here can be found with the Stansted 15. Both the teenage boys mentioned above and the Stansted 15 activists were charged with barely known or used terrorist offences. The charges which are very clearly excessive and unfair seem to illustrate a much bigger picture – one in which there is a growing contempt for those involved in peacebuilding and standing up for the human rights of other vulnerable groups.

It is possible to imagine an alternative political climate. One with a little less contempt, xenophobia, and hostility and a little more compassion, humanity and respect for human rights. We think we would have seen a very different outcome to these situations, and in fact for the rest of the 356 people who have lost their lives crossing the Mediterranean already this year.

Europe’s migration policy must be reformed in a way which is both ethical and sustainable, as opposed the inhumane and ad hoc practices Europe has demonstrated since 2015. Three points of action must vitally be taken. First, a civilian rescue operation must be deployed, while NGO and commercial vessels must not be punished for fulfilling their legal duty to rescue those in distress. Second, a solid European-wide mechanism for the resettlement of rescued migrants must be enforced, whether through quotas, matching systems, sanctions or other modalities. Without greater solidarity in burden sharing the crisis in the Mediterranean will continue to deteriorate. Third, safe ports of disembarkation must be made available. Even if no agreement has been made on their relocation, EU member states must allow for the quick dismemberment of boats whenever in their territory so as to respect their basic human dignity.

More than anything, compassion for human life must be felt among policy makers and society as a whole. National interests should never trump human rights, and we as Europeans do not have the right to value the lives of others less than we do our own. The high sensitivity of the subject does not mean we can pretend it doesn’t exist, and with so many thousands drowning in the Mediterranean every year, we cannot afford to keep mishandling the situation over and over again.

Elysia Rezki is a student of European law at the University of Malta. She is currently undertaking a placement at QCEA where she is supporting our human rights programme. Back in Malta, she is also a volunteer with a human rights NGO working with migrants and refugees.